When you book with an account, you will be able to track your payment status, track the confirmation and you can also rate the tour after you finished the tour.
Sign Up
1855

Luxury Rome Tour
5.0
Based on 30 reviews

Fabrizio Mania
08:54 07 Aug 20
Honestly i never had a tour like this, simply amazing if you want to see and feel the real taste of rome you must book a tour with bruno, he is really professional and gentle, very good english and amazing car, that'all you need for a great experience.

Akram Elghannam
22:57 28 Jul 20
Nice service and one of the best tours with Bruno this man is so kind and the service was so amazing really.. we had a nice tour with him in rome and from rome to one of the most beautiful cities in Italy "venice" really it was a nice time and we spent a nice holiday over there with a nice service.

MN Master
15:32 17 Jan 20
We have book a full day tour in rome whit italy in tours. We have a amazing tour day and we realy enjoyed to visit rome whit bruno driver and tour guide. The van was realy luxry and confortable.Bruno was the best driver we meet in rome. when we come back to italy we will call you bruno. thanks alot

Jerold Needelman
07:11 11 Dec 19
Bruno was the best! Prompt, pleasant & helpful. Used him twice while in Italy. Would definitely use him again. Great guy. You have a really good person working for you. Don’t lose him!

Karim Sabry
18:17 08 Dec 19
Had an amazing trip with Bruno! Really knowledgable of the areas we visited, and got us seats at the most wonderful places with great views. We had a wonderful trip with him to the castelli Romani. Would definitely use his services in the future!

Ali Hossain
06:01 09 Sep 19
Bruno was fantastic and very resourceful in dealing with my last minute request. At less than one day's notice, he organised a memorable full day itinerary with a 7 am start so that we could see the main sites without obstruction and a private tour guide to the Vatican museum with an afternoon lunch by the beautiful Castel Gondolfo. Very personable and friendly. Would definitely recommend and will use his services again when I visit Rome or other places in Italy. Grazi mille Bruno! Un abbraccio da Dubai

Ahmed Raed
21:26 19 Aug 19
The best tour guide in rome because he know everything and everywhere in Italy. I guarantee for you will spend a very nice holiday with him like what I did with my family. The price was awesome and driver was funny.

Venktesh Naidu
07:14 30 Jul 19
The best tour operator in Rome, the guidance and quality of service provided by their team is excellent.... Apart from tour knowledge Bruno help us with details of local areas and he is interested person who keeps on make you laugh and enjoy the best 🙂👏👏👏

karim al shaar
11:06 24 Mar 19
Great and fantastic expriance we have best time and holiday with the company of bruno Good driver and nuce cars We visit everwhere and bulruno take us to the best resturante and lovely ic cream The full day in amalficost was incredible And tivoli was wow I really enjoyed and i fell gery happy with my family We was in 6 person and we have a luxury van for all Thanks bruno we love you 😍 I will tell all my friend abput my experience

Nathalie Haddad
14:47 11 Mar 19
Bruno is the best. He is very kind and we have lovely time with him and he is very funny We book Pompeii tour and Florence tour Liya was really great experience highly recommend thanks a lot Bruno we love you

fauzi oji
04:50 27 Feb 19
Holla bruno, its me Fauzi and Meynar from Indonesia. Bruno was just great and such a funny guy with bunch of humours and lots of energy. Always on time. Excellent service, really recommended. We ride a Great luxury comfort van, its a Mercedes benz V class. We had more place to see, Bruno took us to our requested tourism objects

Why Book With Us?

If you need more informations do not hesitate to contact us. We will be happy to help you.

Head out of Rome to Ostia, an incredible area of ancient ruins where the Eternal City meets the sea, on this half-day morning tour. Just 30 minutes from the center of Rome, Ostia offers well-preserved ruins and tranquility away from the Italian capital. The ruins are convenient, compact and shady, and provide a tantalizing glimpse into daily life in ancient Rome.

From your location in Rome: Hotel, B&B, Other

For a full refund, cancel at least 24 hours in advance of the start date of the experience.

Head out of Rome toward the sea on this educational and entertaining half-day morning tour of Ostia, the ancient Roman ruins that lay just outside of the city. Ostia was once a flourishing port and business center until it was eventually abandoned after the barbarian invasions. Stroll around these well-preserved ruins with your guide learning about what daily life was like here 1,400 years ago.

Begin at the Via della Tombe heading toward one of the three gates to Ostia Antica (ancient Ostia), Porta Romana. Stroll down Decumanus Maximus, the central thoroughfare that goes across Ostia. From there arrive at Terme di Nettuno, where you’ll see intricate mosaics representing Neptune and Amphitrite. The oldest archeological remains that have been discovered are from the third or fourth century B.C.. Learn about the history of the place from your knowledgeable guide and seek out some of the oldest ruins there.

See the ruins of theaters and public baths, forums and former residences. Near the Forum square you will also find the House of Diana and the Thermopolium, an ancient Roman bar with a marble counter and a fresco depicting the fruit and foodstuffs that were sold there.At the end of Via dei Dipinti, a museum displays some of the ancient sculptures unearthed at Ostia.

After a while, head back to the Eternal City having seen a historic swath of ruins that are hard to come by in Rome. 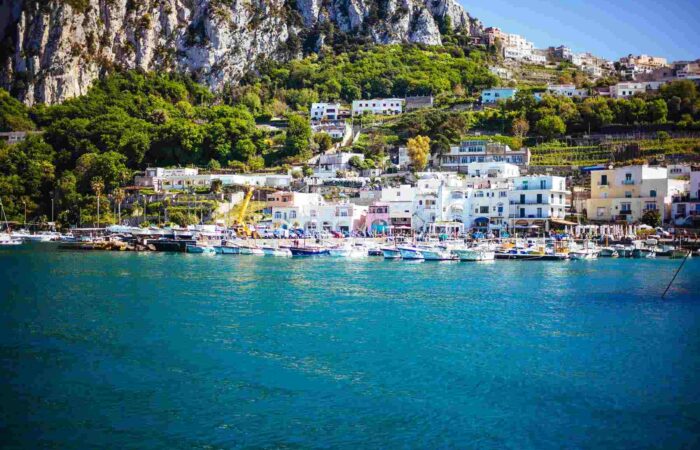